This week while starting to build a huge SaaS product, I had to make many decisions. The biggest decision I made was to build that SaaS product with the Microservices architecture.

Thankfully, Lucas Chen had this amazing series that explained the React + GraphQL + Docker Microservices architecture. In his series, the backends were microservices but React was not hosted on Docker. I wanted it all on Docker, so I had to research a lot, about integrating React (especially Next.js) with Docker.

After a few days of research and setting up a Containerized Next.js App, I am here to share with you how to do it.

Setting up a Next.js shouldn't be hard.

Wait! We are not doing it all from scratch.

Instead, I would recommend you to clone this repo. We will learn about containerized Next.js from there. In this way, you will be able to compare your progress to that repository so that you can ensure you don't get lost in a long tutorial.

The above repository includes...

🚀 Clone and Setup the repository

As you cloned the project, the Next.js App is ready to run.

Just run the below command to fire up the development environment for the Next.js project.

👁 But Kumar, how does this thing even work

You might be wondering where your Next.js project is staying.

It is in the packages/landingpage... 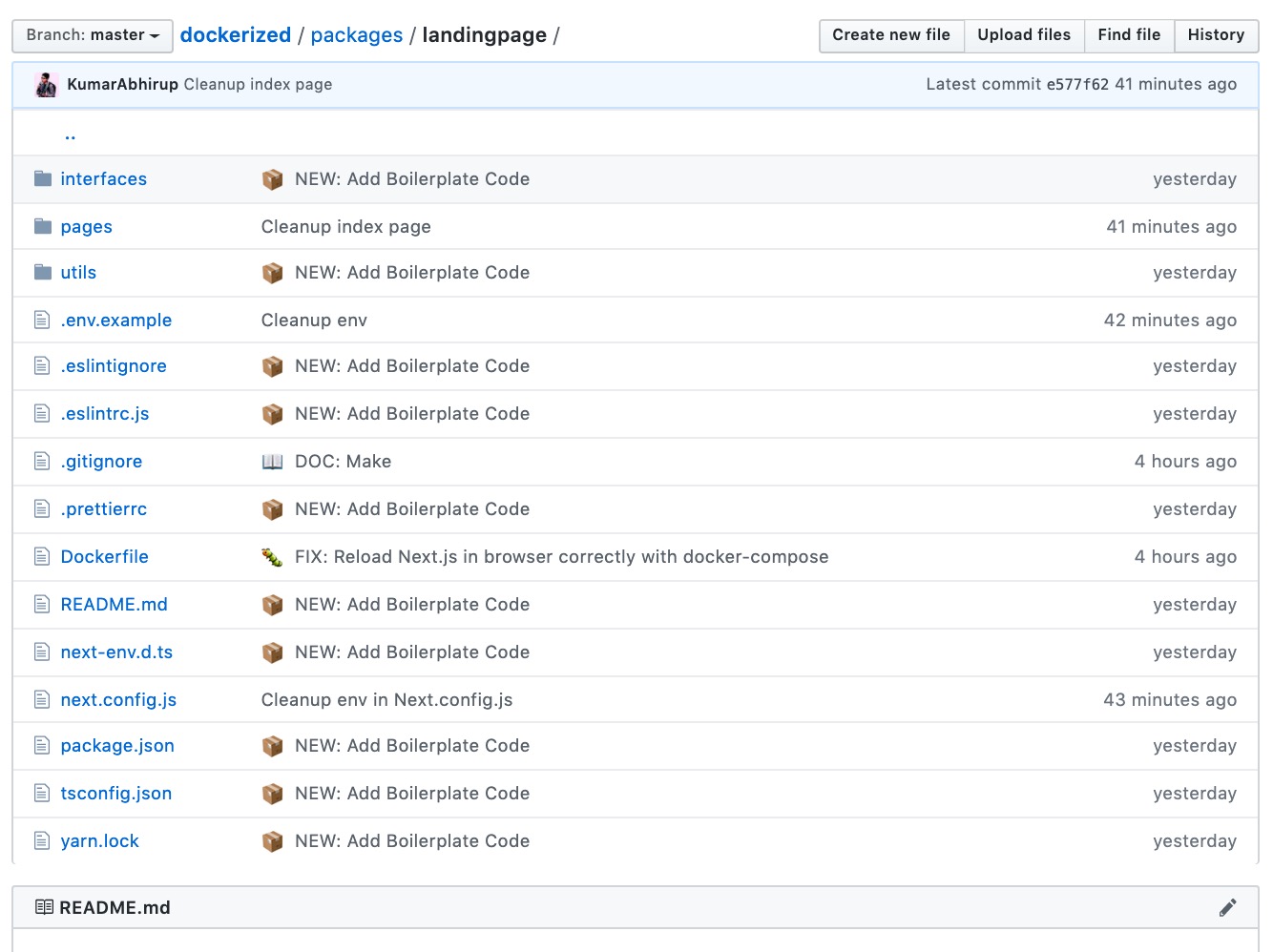 You might be wondering why that Next.js project is kept deep inside the file system.

I did it because no one dockerizes Next.js when they are only using Next.js...

Dockerizing makes sense when you have a huge container architecture that connects your React frontends to the Containerized backends.

So, the repository would not just contain a Next.js project but would have backends kept in the same packages folder.

📦 How to containerize Next.js

To use Docker to containerize any code, we need to have a Dockerfile in the package. Every container has its own Dockerfile.

Next.js too, will have its own Dockerfile. Let us take a look at it.

Let me explain what's happening here. Here, by FROM node:12, we are telling Docker to work with the Node.js image.

The below code snippet tells docker to create directories, namely /usr/src/app. We also tell Docker to use that directory as its primary workspace (for carrying out processes) hereafter.

The below code snippet copies package.json and package-lock.json from your local cloned repository to the Docker Container and then runs npm install on it. I recommend you to take a look at package.json of the Next.js container so you get the idea.

Now that we have all the node_modules ready, below code will copy our code from our local computer directory and will put it into the Docker Container Directory.

Then the Dockerfile builds the Next.js app, exposes port 3000 (where Next.js works by default), and runs the command npm run dev.

I hope you understood all that is happening due to the Dockerfile.

Now, we have successfully containerized the application with Next.js! But we are not yet done.

For hot-reloading to work with Next.js and Docker, you need to have the below code snippet added to the packages/landingpage/next.config.js.

We are still not done!

To run all our containers (in this case only one) together successfully, we will need a docker-compose.yml file in the root of the project.

Check out the docker-compose.yml in your folder structure.

The above code snippet makes sure that port 3000 is exposed. The docker-compose.yml file also tells Docker what services to build and which Dockerfile to use.

The env_file tells the composer to use a .env file which if you have not yet made in your project, please add it for it to work.

The volumes part is very important here. Without it, your Next.js will work, but the _Hot Reloading Developmental Feature` would not work.

If you surf through the repository carefully, you will understand how to containerize Next.js with Docker.

To run the Dockerized Next.js app...

Run docker-compose up and open http://localhost:3000 in your browser.

When deploying to production, just make sure that you make a small change in your packages/landingpage/Dockerfile.